The Hull Lab focuses on the basic biology of human fungal pathogens. We use the meningitis-causing environmental fungus Cryptococcus as a model for our studies of fungal sexual development, spore germination, and fungal pathogenesis.

Using biochemical, genetic, molecular, bioinformatic, and cell biological approaches in the Cryptococcus system, we are 1) determining the mechanisms by which Cryptococcus undergoes sexual development (assessing gene regulation, protein-DNA interactions, and transcriptional networks), 2) discovering the resistance, growth, and fundamental properties of spores (evaluating dormancy, germination, and cell differentiation), identifying and characterizing novel inhibitors of fungal pathways (carrying out high-throughput screening and drug development), and investigating how spores and yeast interact with host cells in culture and in vivo (parsing host-pathogen interactions and virulence pathways).

Spores are an essential cell type required for long-term survival across diverse organisms in the tree of life and are a hallmark of fungal reproduction, persistence, and dispersal. Among human fungal pathogens, spores are presumed infectious particles, but relatively little is known about this robust cell type. We study how the properties of spores are influenced by the process of sexual development and how this connection influences pathogenesis. Recent work provided the first insights into the basic protein components of infectious pathogenic spores and revealed unexpected molecular connections between infectious particle production and spore composition. 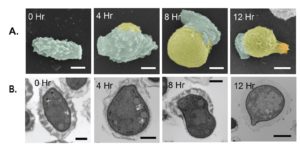 Using spores from Cryptococcus, we developed a quantitative platform to evaluate spores as they undergo morphological changes during differentiation into vegetatively growing yeast. Combining advances in microfluidics with a robust fungal molecular genetic system allows us to study key temporal, morphological, and molecular events that occur during fungal germination.

The process of germination is not well understood, despite its importance in fungal biology and pathogenesis. Using previously identified spore proteins as markers for germination, we developed a luciferase-based quantitative germination assay that we use to screen compound libraries. Inhibitors of germination could be developed into antifungal drugs for prophylactic use in at-risk patients. Further characterization of inhibitory compounds will also deepen our understanding of the essential and specific molecular events that take place during germination. 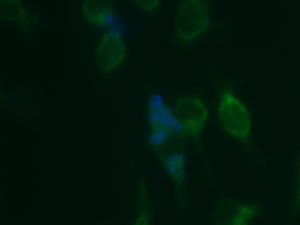 Among environmental fungal pathogens of humans, spores are presumed to be the primary infectious particles, given their small size, environmental resistance properties, and capacity for aerosol dispersal. Surprisingly little is known about pathogenic fungal spore biology and spore-mediated infections; however, it is clear that for fungal spores to colonize new environments (such as a host lung) differentiation from a dormant spore to a vegetatively growing cell (germination) must occur. 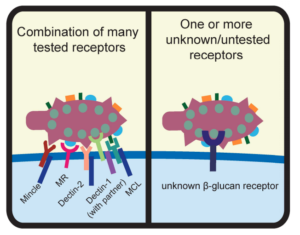 We study how spores cause disease using in both in vitro and in vivo models. Phagocytosis by innate immune cells has been implicated in the dissemination of spores from the lung to other tissues; however, the specific mechanisms by which spore gain entry across the lung endothelium and subsequently escape the lung are not known.

Key differences between spore and yeast interactions with the host remain to be determined.